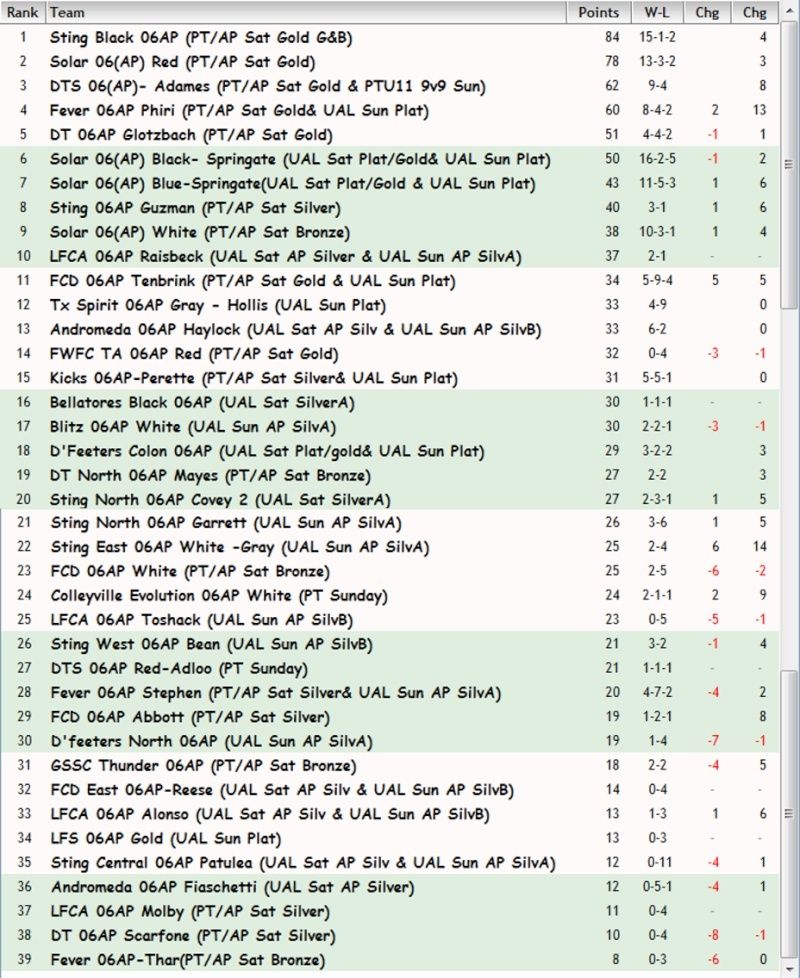 Thank you for taking the time to keep this going; with that, how can Springate's Black team be rated 6th when teams 2-5 have worse records and league strength seems similar? (at least on its face)

CatchyUserName wrote:Thank you for taking the time to keep this going; with that, how can Springate's Black team be rated 6th when teams 2-5 have worse records and league strength seems similar? (at least on its face)

You think Solar Springate's Black should be rated higher?   If I am reading this correctly then I will let you know that the record for his team does not include ANY tier one teams.

-he has played 6 tier 4 teams which are all wins

If you let me know which 2-5 team you think has a worse record than Springate Black I would be happy to compare them for you.

Maybe you could share with us the tiers, would love to hear your explanation for the groupings so early in this change to AP. Obviously you don't have a ton of data.

Blues Fan wrote:Maybe you could share with us the tiers, would love to hear your explanation for the groupings so early in this change to AP. Obviously you don't have a ton of data.

Sure I will be happy to share the tiers as they are right now.    The tiers will slightly change each week as more data is entered.   I will post the tiers from time to time, like once a month.    Not every week.

Just remember the data includes all 05/06 games as well so the tiers will show those teams in there also......not just the AP06 teams.     Why?   Because without the 05/06 games in U10 leagues and tourneys there wouldn't be enough data.    So if one AP team and another AP team play the same competitor even though they haven't played each other it creates the bridge needed.

Give me a few minutes and I will post them. 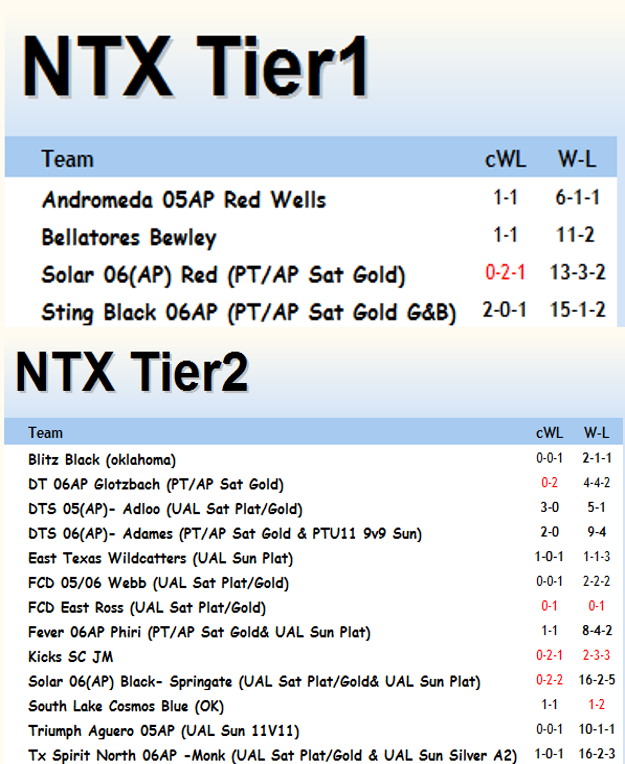 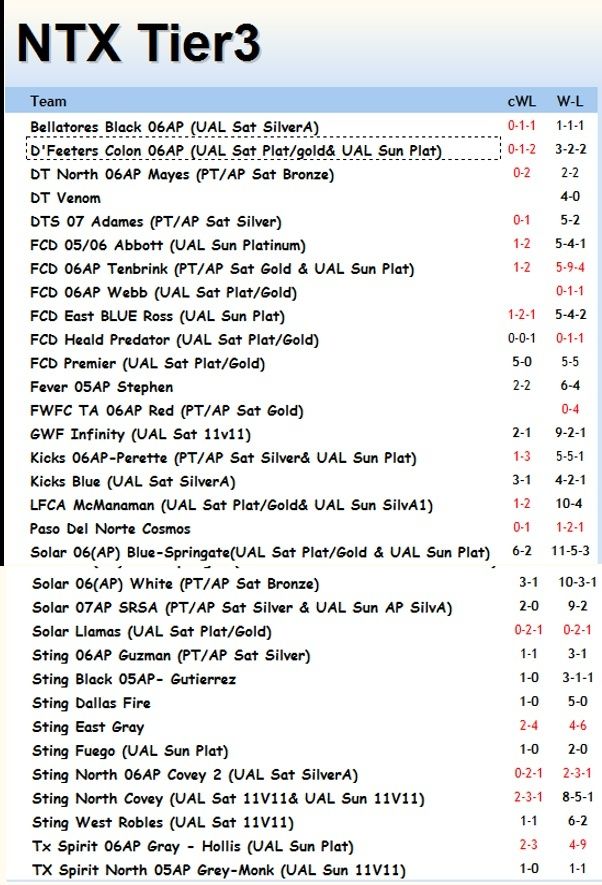 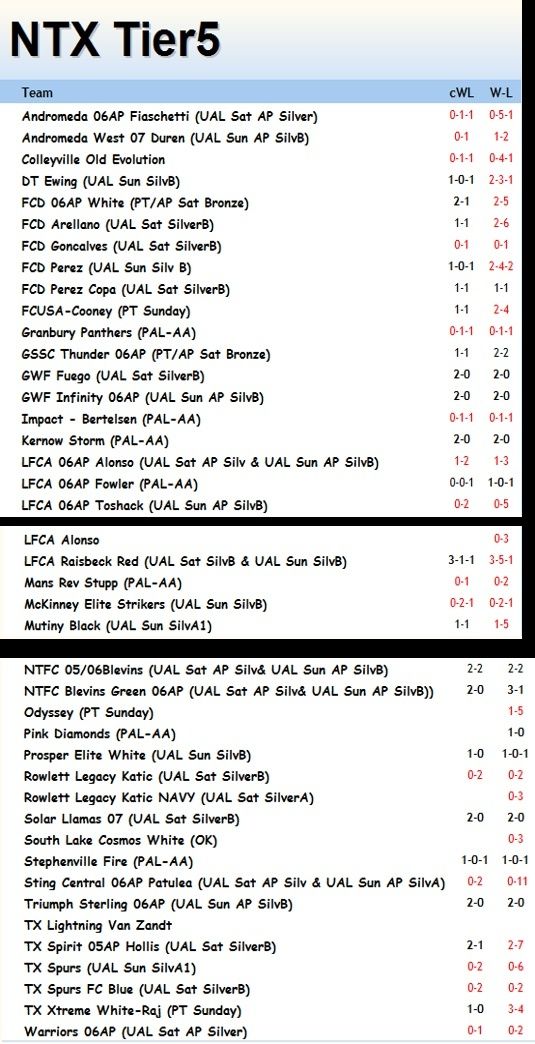 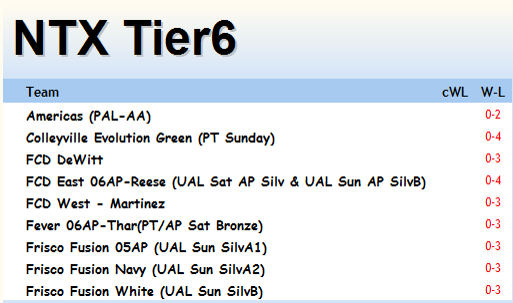 I'll help out here since I have inquired about this not long ago. Beat team's in your tier 3 points for wins, 1 for tie. Divide by total point available ie, 3 wins 1 loss 1 tie is 5 games for total of 15 points. 10 total points scored, of 15 possible is 66‰. Stay above 20‰ to stay in that tier (not move down), if you win above 80% you can move up a tier. Strength of schedule is 30% of your total, so play top teams, move up. Blast lower teams hit a ceiling. #6 just lost to a same tier team and tied a team a tier below them this past weekend. Nothing real crazy yet people, no reason to jump!

My question was only based upon what i saw as the records of those i referenced in conjunction with the stated leagues that they play in. I have no relation to springate's team nor the teams 2-5

Just a reminder a team's tier assignment does not help THEIR ranking.....it affects their opponents rankings as it relates to strength of schedule.  You should be hoping your opponents get moved up....not down.

Initially when I started doing FBR for 06s over a year ago I was advised by the King of FBR to assign the tiers based on where the team chose to play Platinum/Gold/Silver A/Silver B etc for league.   And then after it got rolling to follow the 80/20 guidelines for decision making.

A team with over 80% in their current tier moves up.   A team between 20% and 80 stays put.   A team below 20% moves down.     Now that sounds simple but there is some GRAY area there.   If you move a team up and they have 0% because they have 0 wins and 5 losses against teams above them then they probably don't move up.

When I started doing the 06AP rankings I did not have to start from scratch like I did before.   I had data already so as I put new teams in I compared their game results to their competitors in my database to give them a starting point for tier assignment.    As more games are played I watch it weekly and look for ways to improve the tiering.

Anytime a team wants to know why they are not in a different tier shoot me a message and I will justify it.  If I can't justify it I will change it.   But do give me time.  I try to do things in a timely manner but I do have a full time job and three daughters who are second full time job.     I think all of you know I am a manager of an 06AP team which may lead some to think I have a hidden agenda but I don't.    I teach math, I like data, therefore I am weird!!!!!   I am not as weird as Gophers though.

I will use FCD Premier as an example here even though they are not ranked as an 06AP team yet:

CatchyUserName wrote:My question was only based upon what i saw as the records of those i referenced in conjunction with the stated leagues that they play in.  I have no relation to springate's team nor the teams 2-5

FBR06G wrote:   I am not as weird as Gophers though.

FBR06G wrote:   I am not as weird as Gophers though.

BW I was just testing to see if you read the whole thing. It took like 5 minutes you pass.