Girl teams from Dallas absolutely dominated the DIsney Kick-it3v3 World Championship tourney this past weekend. Please join me in congratulating the following:

03' were not posted but SRSA 03 Dominated Vegas this weekend! Congrats!! They won Disney last year.

For the record, this is not the first year Dallas teams dominated 3v3 World Championship. Net, I know the teams in Dallas compete against each other with a fury. In the end, our dds are blessed to live in one of the best cities in the US for youth soccer development.

Actually it appears '04 Rase came in 2nd which is great esp being their 1st Kick It World Championship.

Don't forget about the Dallas teams that might not won the championship but still placed or had good showings.

'04 DT Galacticos which is mix DT Manchester, Scott, Solar Kenn & LP Dalglish players. They came in 4th out of 12 in their bracket.

Congrats to all the Dallas teams and bring home some hardware.

One correction:
ATTACK 05 is a combo of Lady Aztecs 05 and Liverpool RASE 05

Very proud of these girls who battled thru flu, injury, and other illness to win this year!

One team was left off... while not a girls team... the 04B City Futsal (Dallas M.O.B.) team which had an 05G RASE player on the team won the 04B Elite Division championship.

There was also another boys team (Texas Elite 05B) who I believe is from North Texas that won the 05B Elite division...

My fav part of the weekend was when our girls (Attack 05G) waited in a 45 minute line next to the team from Illinois that they had just beaten in the finals... well, by the time the wait was over all the girls were chatting it up like they were longtime BFF's. It was such an awesome reminder of how sports are so much more than wins and losses. 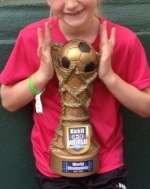 I see Vegas was mentioned...

Kicks SC 01 and Kicks SC Gold 01 both won their respective D1 and D2 championships in Vegas this weekend against the So Cal powerhouses.

I think Monster in the 02 division had to be very gratifying. They had tough competition and struggled in bracket play with close losses and then won the division coming from the losers bracket. That is a tough road to make it past. One opponent might have 5 games and well rested while the other has 8 games and has had 4 in the past 3 hours. According to the results, they avenged earlier losses in route to winning the bracket.