Sting Black will dominate Hyypia. Hyypia is good, but Diaz and Pulp are on another level.
Sting Black wins by 2+ over Hyypia

Anarchy wrote:Sting Black will dominate Hyypia. Hyypia is good, but Diaz and Pulp are on another level.
Sting Black wins by 2+ over Hyypia

You sure are BOLD with those predictions! Especially since Sting Black has Lost the last three times they played Hyypia.

I don't think Sting Black will dominate Hyypia, but at this point I do believe they're the better team - 1-0 Sting Black.

Am I missing something or is that the stupidest response ever...."stupid as gets everyday"

SoccerAdvice2Go wrote:Am I missing something or is that the stupidest response ever...."stupid as gets everyday"

Here is an attempt to give another data point on the ranking system. Strength of Schedule for the CFBAL Platinum 11v11 as a comparison with the FBRs rankings. This is based on the latest 9/16 Ranking. Since Texans Farley is not ranked yet and lost so handily to Pulp (8-0), I picked an arbitrary ranking of #20 for them (might be too high). One thing stands out is Pulp’s ease of schedule for the Fall. The total in ( ) is the added total of the rankings for all opponents being played this season.

this proves that you can always make up statistics to make a point. wouldn't the top ranked team almost always have the 'easiest' schedule? Not sure I get the point to be honest with you. 78.3% of all statistics are made up.

Sounds like a sensitive Pulp DD parent.....I will make it easier for you. For reference, in college football, the schedule does matter in the ranking system...my point is if Pulp is legitimately #1 you would think their schedule would be taken into account.

Hhmm...seems Pulp has a bit easier pathway to the CFBAL title and #1 ranking to me...let's hope they beat this easy schedule convincingly like they did Farley.

Either way they Run into Sting Black and have to beat them to win it. If they do win it? well done pulp. They would have earned it. But let's not give it to them yet. Beating Sting Black is no small task.

Lol, I agree. You can make any stupid argument....My opinion is Texans South are better than all of these teams......A close second to Solar Pulpaneck.

This is about as dumb as it gets. Similar to saying Team A plays Florida St. and Team B plays Oregon so team B's schedule is easier. Really?
I'll jump on the bandwagon that it's a shame DTS can't make it to CFBAL. Personally both Diaz and Pulp would beat them. Great team who plays a good brand of soccer, but not quite as athletic as pulp for sure.

Latetothegame wrote:Lol, I agree. You can make any stupid argument....My opinion is Texans South are better than all of these teams......A close second to Solar Pulpaneck.

And it will have to stay an opinion, at least for now.

nope. i'm neither sensitive nor a pulp - just someone who is good at math. your new theory is dumb. i sincerely hope that you keep arguing that it isn't. this is fun.

Come on now yous guys, let's be sensitive to the SoccerAdvice2Go. This is just part of his frantic obsession where he's forever crazed with the next rankings.

How about this. Give me the statistics on how many times I farted due to the strength of my laughter after reading more SoccerAdvice2Go.

SoccerAdvice2Go,
Let me guess, you work for the EPA or some Global Warming Org!  You stopped at a number that made you happy and helped you make a point no matter how invalid it is and just hoped no one calls your bluff or questions your math.  I don't normally get involved in this type of thing but oh well...

What you have done here is what my college engineering calc professor would chuckle and say in his broken English, "rookie mistake".  I heard that a lot!

So let me try to help you out, 1st, you need to find your constant, which in this scenario I would argue would be a 11 game season,  so in that case you would sum up the rankings of every other team you would face other than your own.

Next you find the variable, which in this case I would argue is the sums you presented, which is the 8 game season sum of opponents ranks.

Now you subtract the 11 game total from the 8 game total to get the deficit (the team with the biggest negative differential has the hardest schedule) so that looks like this.

Below is a picture of the teams sorted by the differential, as well below that is another table that has the sum of all teams 8 games plus the additional sum of their own ranking, which comes out to be the same ranking of strength of schedule oddly enough.  Maybe Professor Xiam could explain that one... 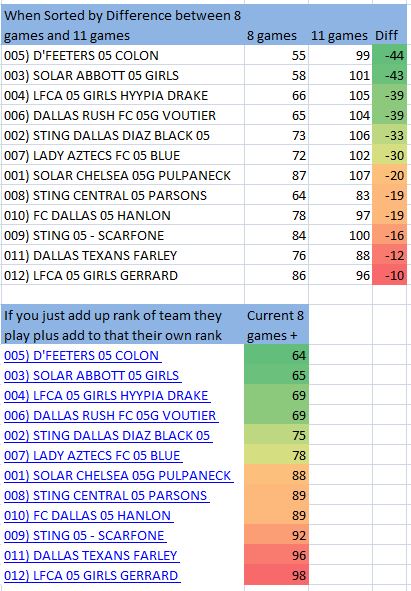 Last here is a full picture of the math tables used in this nonsense...  enjoy (Little tip, click on the picture to see the whole thing) 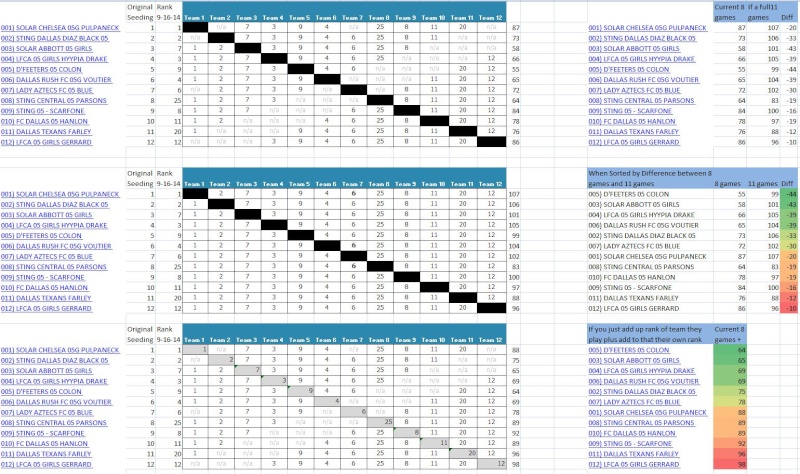 One last factoid, check out this link, this will tell you the original seeding used in gotsoccer... http://events.gotsport.com/events/resultsgrid.aspx?EventID=40022&GroupID=374707   raise your hand if you just learned something

"There are three kinds of lies: lies, damned lies and statistics."
Mark Twain

"Get your facts first, then you can distort them as you please."  Mark Twain

"I can prove anything by statistics except the truth."
-- George Canning