Samba Futbol Club invites you to participate in the one of the most competitive youth soccer tournaments in North Texas, the Royal Winter Invitational, January 9-11, 2014. 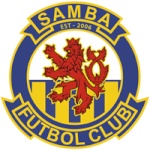