Just wanted to say congratulations to all the Solar teams advancing and/or winning the ECNL and Regional Championships in the last couple days.

Solar 02 ECNL - Missimo is headed to California for the ECNL National finals next week after taking down some stiff competition along the way in Chicago.

Solar 02 Hopkins/Grado was crowned USYS Region III Champions this morning in North Carolina and will play in the National Championships the end of July in Frisco.

Solar 02 Naizer was the Finalist in the Region III Championships, falling 0-1 to Solar Hopkins/Grado.  An all Solar final 2 years in a row.

And lastly Solar 03 ECNL - Pulpaneck won the ECNL Nationals on Tuesday in Chicago.

The club seems to be rocking and rolling at an impressive pace going into this next season.

Congratulations to ALL the Texas teams that played in either Chicago or North Carolina.   The path to get there was not easy. 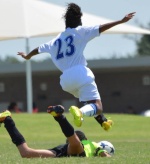 Re: CONGRATS TO SOLAR

Anybody watch 02 Solar Grado this morning in the Championships? They're up 1-0 on La Roca who ties it in the final minute.


You can see it in person at FCD or watch it at home from this website: http://championships.usyouthsoccer.org/live/