We Play Camps are designed to get students “playing” in a fun and exciting environment. Campers will play a number of games to increase their control, shooting, passing, dribbling and creativity, while having a great time and meeting new friends!
The final day of the camp will feature a skills competition and a world cup 5v5 futsal tournament with prizes awarded.

Spend 3 days with top athletes from City Futsal's premier Futsal league. This training camp is designed for elite athletes to train together in an environment that is both intense and competitive. 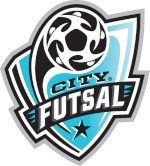