USA 3v3 Soccer Nationals are in Dallas again this December!  Teams from all over the country will be competing for a chance to be the true 3v3 National Champion.  Divisions will be open for teams of all skill levels and experience. 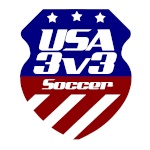