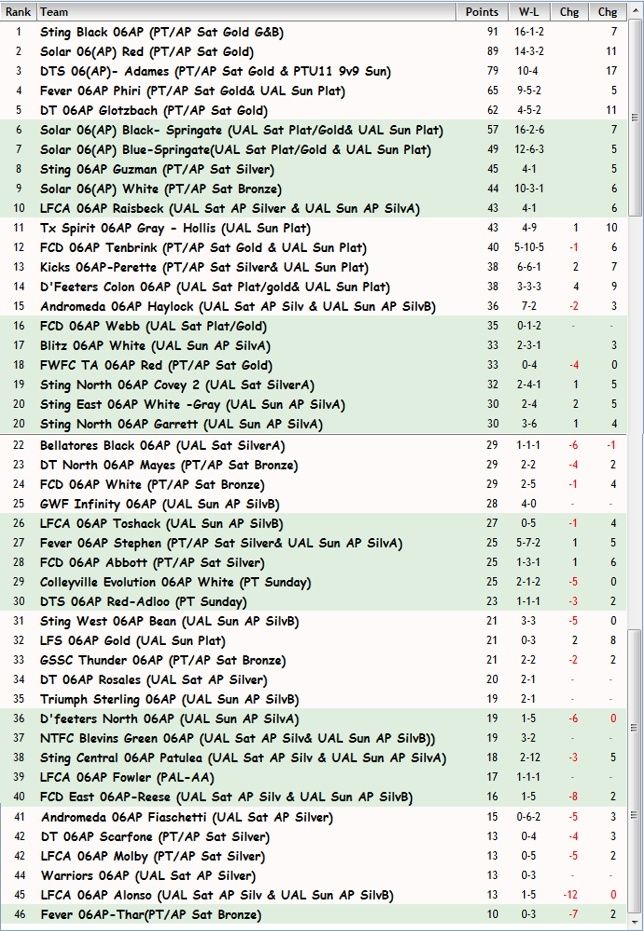 Please note FCD 06AP Abbott is now with Liverpool. I will update the team name on the next FBR. It is already updated on the team contact list.

Will there not be a qualifying tournament over the summer for classic league? It will only be based on these point rankings?

There will be a qualifying tournament too

So what matters more, these rankings or the tournament?  Can you explain how this works?

The LHGCL Qualifying Tournament (a.k.a. the "QT") is what matters. That is what will determine what '06 teams will get to play in the U11 division of LHGCL this coming fall.

The FBR Rankings are meant to provide a general overview of the relative strength of teams. The rankings basically serve 2 purposes:

1) Entertainment and fodder for forum debate
2) To give some guidance to tournament and league directors, coaches, and parents so that they can set up appropriately competitive brackets/divisions, seek out appropriate competition, or seek out teams that may be a good fit for their kids.

With that said, the FBR Rankings started with the '01 age group, when they were in academy at U9, and over the past 5 years, FBR has been roughly 85% accurate at predicting which teams will qualify for LHGCL at U11.

LHGCL has a seeding committee that is responsible for seeding the teams for the U11 QT. For the '01's, '02's, and '03's, there were clear deviations between the final FBR rankings (published the week before QT starts at the end of July), and the QT seeding. However, the past 2 years, there has been much closer agreement between the final FBR rankings and the QT seeding, suggesting that the seeding committee at least looks at FBR for reference.

Regardless of the level of agreement between FBR and QT seeding, both the FBR and QT seeding have been equally accurate predictors of which teams qualify for LHGCL at U11, again, at roughly 85% accuracy over the past 5 years.

Thank you very much for the info!!! How many teams qualify for LHGCL? I under stand there are 2 separate divisions. How many in each?

At U11, they will take 30 teams.  The top 20 qualifiers will be placed in the U11 Division 1 "Supergroup".  The last 10 qualifiers will be placed in U11 Division 3.  At U12 it will go to 3 divisions of 10 teams each.  Beyond U11, D1 and D2 will generally be populated based on the leagues promotion/relegation rules (Too complex to go into here, go to the LHGCL website if you want to read up on all of the rules).  Typically, only the bottom 4-6 spots in D3 will be opened up and filled via the QT at U12-U19.

At U11, typically somewhere between 45-50 teams sign up to play in the QT.  The exact format for the U11 QT has varied a bit over the years, but GENERALLY, teams are seeded and placed in 4-team brackets for week 1 of the tournament.  Each team plays the other teams in their brackets, with the week 1 bracket winners being awarded spots in D1 (not always the case, but has usually been the case).  Then, the remaining teams are placed in new 4-team brackets for week 2.  The week 2 bracket winners will also get into the D1 Supergroup, and depending on how many teams signed up initially, typically 1 or 2 week 2 2nd place finishers with the most week 2 points get the remaining spots necessary to round out to 20 teams.  D3 will be filled with the remaining Week 2 2nd place finishers, and how ever many 3rd place teams are needed to get to 10 (again determined by week 2 point totals).

Does your head hurt yet???

hahahahahaha, its been hurting for a while now!!!! I really appreciate all of the help!!!